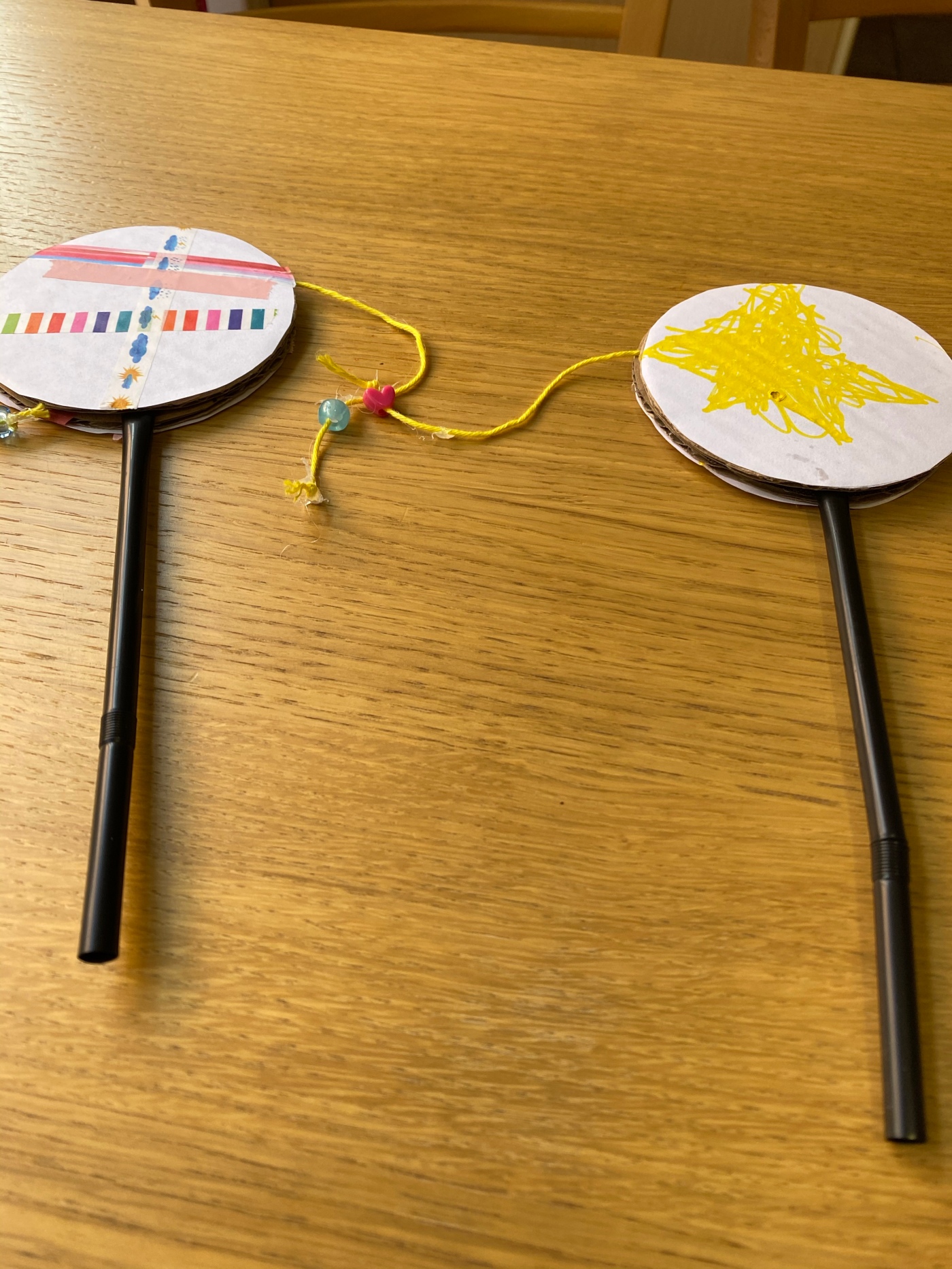 We made these drums just before half term (which was last week here in Birmingham, UK) on a Saturday morning. I was trying to tempt the children away from the iPad and using screens, and hadn’t yet got them out of their pyjamas – well it’s not like we had anywhere to go to! This was a nice activity that kept them busy for about 20 minutes, decorating and sticking stuff onto their paper and cardboard. As I wanted nice, clean cardboard circles for the drums, I did prepare the circles in advance, but if you are not too bothered about them being exact, it would be great fine motor (pre-writing) scissor skills practice for your children. If I had just my 5 year old with me, I may have been tempted to get him to cut the shapes out for this activity himself.

So, what do you need to make this drum?

First of all, I drew around my masking tape roll. You need 2 of these for each drum you make. I made 4 circles because I was making 2 drums, one for each of the children. I then cut out 4 same size circles out of paper.

Once I had my circles all ready, I called the children in to help me put them together. My son had decided he had had enough of helping mummy making these instruments, and definitely did not want to be doing this. He really wanted to be playing on the iPad to be honest and I had said no, so he wasn’t best pleased with me at that moment in time. However, as soon as he saw glue and pens out and realised I was asking him to make something fun he changed his mind.

The children used Pritt Stick to stick the paper circles onto the cardboard circles. My son used felt pens to draw a star on either side of his drum, and my daughter used washi tape to decorate her circles. Interestingly, when we started making things with washi tape astound christmas my daughter, who was 2 at the time, would peel off as much tape as she could and stick it mostly to the table, rather than the paper or card we were using. I noticed with this task that she was much more purposeful with putting the right size tape onto the paper and trying to smooth it flat. She was starting to make much more conscious design decisions than haphazardly placing the tape as she had done only a few months earlier.

While the children were decorating their drums I cut 2 pieces of yarn. I cut about 4 inches. The yarn or string needs to be around 2 inches or more longer than the diameter of your cardboard circle. It will lie across your circle, so that there are 2 lengths of yarn either side that are roughly the same length. This is easiest illustrated with a picture I think!

The children chose 2 beads each, and we threaded them onto each side of the yarn.

Next we got a straw, 1 for each drum and flattened the top of it and folded it over slightly. This is the end of the straw that will be sandwiched between the 2 halves of the drum.

To make up each drum, we took 2 circles, liberally glued one half (I used hot glue, so didn’t let the children do this, so the drum would hold together better) and placed the yarn onto the glued circle together with the flattened and folded straw.

I then placed the other half on top, covering the first circle. Then as our beads kept trying to escape from the yarn (thicker yarn or beads with smaller holes, or even better knot tying would possibly resolve this!), I tried to put a little blob of hot glue on either end of the yarn to keep the bead from escaping. I did not do a very good job with this, and got in a bit of a mess with it!

To play the drum, your children (or you) will need to hold the straw in between their palms with the cardboard at the top. They with then twirl the straw around in their palms so that the beads hit the cardboard and make a noise. It is another nice, quiet instrument, but lots of fun. My children have had it out several time since making it. I mentioned above that I didn’t do a great job first time with the hot glue on the end of the yarn – so much so that one of the beads flew off the yarn the first time, so be generous with the glue if you are using it, or tie several really large knots in the yarn/string!!